Maybe it has something to do with being a naive, ethnocentric American (sorry, I’m a bit patriotic after last night’s politically charged television lineup) but I find myself frequently falling into the trap that says that self-image issues only span our borders and no one else’s. When I get on my soapbox, raise my fists, and go on verbal rampages against “society,” I’m usually referring to American society, because I really don’t know much else. (I mean, I did live in London for almost a year but that doesn’t really hold a candle to the other 25 I’ve lived in the States.)

All that to say, a good friend of mine sent me a link to this article about diet advertisements in Japan. Yes. You heard me right. Diet. Advertisements. In. Japan.

When was the last time you looked at a Japanese woman and was like, “Dang, that girl needs to lose some WEIGHT?”

I don’t know about you, but I honestly have never uttered those words. Maybe I’ve just been uncharacteristically lucky enough to only lay eyes on super thin Japanese people (I mean that in the nicest I hate you for being so naturally small but not really I actually love you and will you please make some babies because all of you are so adorable it’s too much to handle way possible) but I honestly feel as though the Japanese are just, on average, a smaller group of people than we Americans.

Ugh. I keep feeling like Im going to get a slew of, “You’re a big fat racist!” comments. I swear I’m not! I voted for Obama!

Anyway. None of this is the point.

The pictures and numbers in the article. Holy hell. 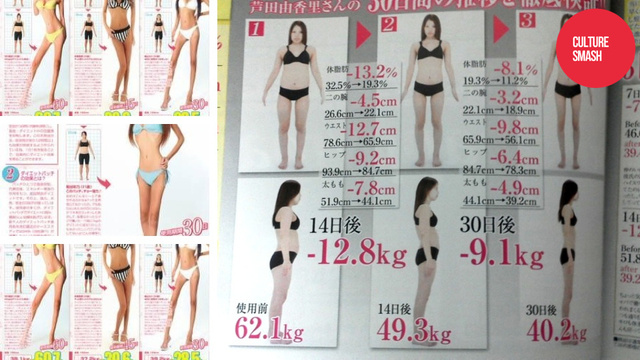 If you’re like me, and you can’t read Japanese, let me do some translating for you.

The women in these ads (who are, as you can plainly see, the unfortunate victims of some of the most atrocious Photoshopping jobs I’ve ever laid eyes on) have apparently dropped up to 60.7 kilograms (which, if you are doing the math in your head and you’re a bit stumped, is about 133.4 pounds) in 60 days.

SIXTY DAYS? As in, TWO MONTHS? A hundred and thirty pounds in TWO MONTHS?

Does anyone believe this is at ALL possible, least of all HEALTHY?

Somehow, these diet ads are trying to convince their readers (who, by the way, ARE YOUNG GIRLS, of course) that these little women lost the equivalent of a eighth-grade-sized Lindsay in TWO MONTHS? And, furthermore, that they needed to lose that much weight in the first place?

I am speechless. If nothing else, this article proves that the diet industry is deceptive, evil, and (evidently) thinks we’re all just a drooling pile of schmucks who can’t tell the difference between an overly photoshopped toothpick and the normal-sized person she once was. While I thankfully have yet to stumble across an advertisement of this caliber in the states, it still puts me on alert to all other diet ads out there.

Remember what your good pal Lindsay has said about pictures in magazines: 99% of them are Photoshopped. You cannot believe what you see (or even read, in this case.)

Check out the rest of the article and scroll through the mind-blowing pictures here.