It may sound strange, but on this first day of Advent as we are all looking to the manger, I can’t help but also look toward the Garden of Gethsemane.

Stranger still, for me, the Garden of Gethsemane looks less like a collection of flora and fauna and more like a 10ft by 10ft room with a skinny window and white walls covered in Harry Potter quotes and framed Pokemon cards. And for me, Good Friday wasn’t in the spring but, rather, on Friday, September 20th, 2019, and my Cross, the cup that I begged the Lord to take from me, was a stage 2/3 cancer diagnosis. At 33. The same age Jesus was when he was betrayed.

The weekend of my diagnosis, when I couldn’t sleep and those closest to me were all sleeping soundly in my house, I curled up on my folded-out futon in my office, in my garden, and I felt just like Jesus when I looked up at that ceiling and cried out to God asking why He had abandoned me.

Just then, an idea flashed across my mind, no doubt in hindsight a prompting from the Holy Spirit. Call 211 Big Bend, a 24-hour support phone line. I rolled over, grabbed my phone in the dark and hit the three numbers and waited patiently. After a few seconds, a sweet nursing student named Kathrine answered. I quickly explained to her that I had just been diagnosed with cancer and I was feeling very alone and, you guessed it, hopeless.

After an hour of her validating my feelings and walking me through breathing exercises to bring my anxiety down, we ran out of things to talk about. So I turned the conversation from me to her.

“So, Kathrine,” I said, clearing my throat and wiping away some residual tears. “I don’t want to be alone and so I can’t hang up with you, so! Tell me about you! Why did you decide to volunteer for 211 Big Bend?”

Upon this request, I could tell Kathrine was shifting in her seat a little bit, clearly uncomfortable with this unconventional role reversal.

“Of course,” I said, kind of disappointed.

“Okay, actually…” she offered, acknowledging my dejection. “Do you want to know the REAL answer?”

I straightened up on that futon. “Of course!”

“I decided to volunteer for 211 Big Bend, and to also go to nursing school, because when I was four years old I was diagnosed with a very rare, aggressive, cancer.”

“The nurses, doctors, and counselors I met during treatment changed my life. I wanted to do exactly what they did for me for other people.”

I kept silent. Stunned. Of all the middle-of-the-night volunteers that could have answered my call, I got the one who had beaten cancer. As a child, no less.

“That’s… that’s amazing,” was all I could eek out as tears collected in my eyes.

For the next hour, Kathrine and I chatted about what I could expect in treatment, and she proclaimed a truth, a HOPE over me, that has continued to carry me through, even to this very moment where I am looking back at six weeks of radiation and chemotherapy and also staring down two major surgeries and five more months of chemo.

“Today isn’t the day of your diagnosis,” she declared. “It is your first step toward remission.”

And suddenly, the fear and anxiety I was feeling started to slowly be replaced with hope. Hope for healing and remission, sure, but also hope in a God who hears the cries of his children in their gardens of anguish.

It’s a quiet, dark Sunday morning. Dan is already at church, and Dax is still sleeping. Case and I, forever the early risers of the family, have been sitting at the kitchen table for twenty or so minutes, peacefully sharing some apple slices with peanut butter. Everything feels calm and normal. I turn my head over my left shoulder to check the time. The clock face and I make eye contact — it’s 8:15AM, he tells me — as I feel the subtle yet sharp tug in my neck.

It’s the catheter in my vein jolting me back into reality.

It’s been a month since I was diagnosed with cancer (rectal, stage 2-3) and, over my breakfast, I’m staring down both my relatively unaffected four-year-old son and the beginning of my third week of chemotherapy and radiation. Immediately all of the familiar emotions pull up a seat at the breakfast table. Anger, Resentment, Hopelessness… one by one each guest rolls in uninvited, and I have no choice but to give them the space they command.

“Tea?” I ask them all. They nod indifferently.

Case starts singing to himself as I get up to make myself some. While it steeps, I mindlessly scratch my port site. It itches all the freaking time, probably due to my skin’s reaction to the adhesive on the bandages. I mentally run through what tomorrow morning looks like for me: I will wake up about an hour before my radiation appointment, drink at least 24 ounces of water so that I have a full enough bladder for treatment, and then I’ll head to the radiation facility. After spending 20ish minutes half naked on a table while radio waves are zapped into my pelvis, I’ll dash to the bathroom to pee out all of the water I drank, get dressed, and then drive straight to my medical oncologist’s office. I’ll talk to him for about an hour, and then I’ll walk to the chemo infusion center where I’ll sit in a mint-green recliner for a couple more hours. My blood will be drawn and levels will be checked. Zofran will slowly drip into my veins. My chemo pump will be attached to my chest, and I’ll have it on me for 24 hours a day until Friday. When I’m finally released, I’ll get home to open my laptop to try and get some work done, grateful to have a remote job that allows me to work from my bed while the fatigue does its work. As I play out these events in my head, Annoyance pulls up a chair to the table. It’s all so annoying, cancer. The hours I spend in doctor’s offices these days add up to a part-time job, but one I have to pay to go to.

In my irritation, I’m reminded of Anna, my sweet chemo nurse, with whom I’ll spend a pretty substantial amount of time tomorrow morning. She’s my age, with kind, wide eyes and strawberry blonde curls. She has two kids — the same ages as mine — and she’s intimately acquainted with the realities of trying to battle cancer while also having a job and a spouse and children to raise; her husband was just diagnosed with brain cancer. She’s my chemo nurse, but she’s also her husband’s chemo nurse. It’s just so dreadfully unfair, and I check myself in the moment. Yes, my treatment is annoying. It’s not pleasant. But, it could be worse. And I know that.

Enter: Guilt, my least favorite of the emotions, because honestly, no one freaking asked you, Guilt.

He takes up so much more space than he should. He jabs Anger in the ribs, setting him all the way off, and suddenly the table is just too crowded. Instinctually, Case gets up to make room for all of these Big Feelings, brings his dishes to the sink, and goes into the living room to play with trains. I grab the hot mug of tea and lean against the counter, letting them all duke it out as long as they need to. I sip carefully. My eyes water.

Through tiny tears, I look on at all of them fighting, and all of a sudden Indignation walks through the door. His presence is commanding. He is big and loud. He points his big, scary finger through the door and glares at everyone else sitting wide-eyed at the table. He doesn’t have to say anything; they all know what to do. One by one, each of them gets up and makes a clumsy but swift exit.

I’m indignant because, in the month since my diagnosis, I’ve discovered that no one is safe from cancer. Everyone is touched by it these days. Either you have it or you know someone who has it. And there’s no explanation. No rhyme or reason. It just shows up at a routine check-up, or in my case, in a colonoscopy I had to badger three medical professionals to get. And it’s unjust and infuriating.

And it’s only just beginning. 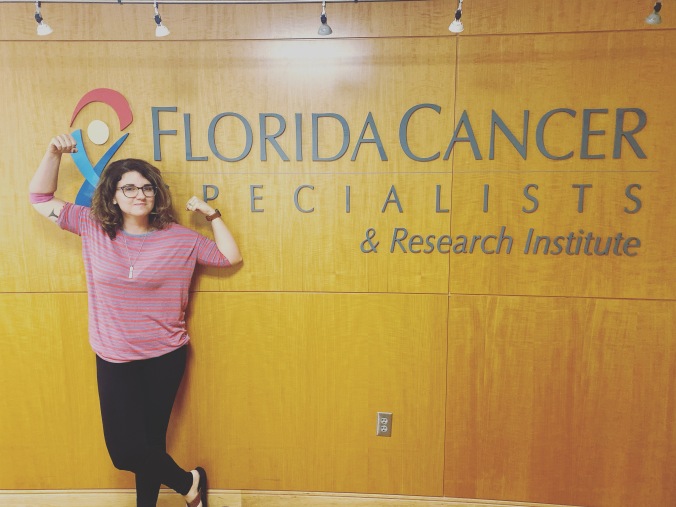 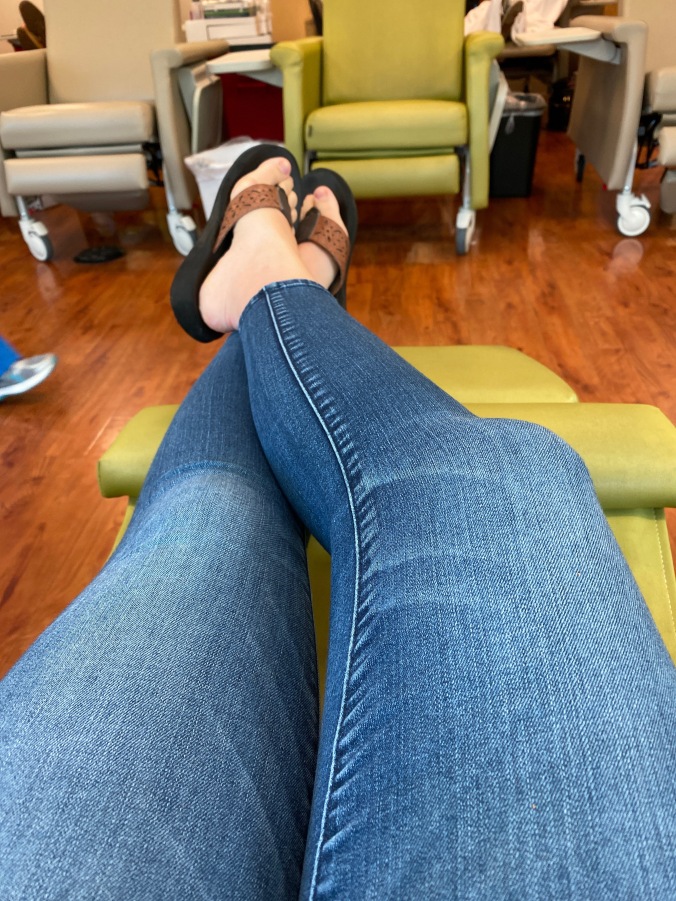 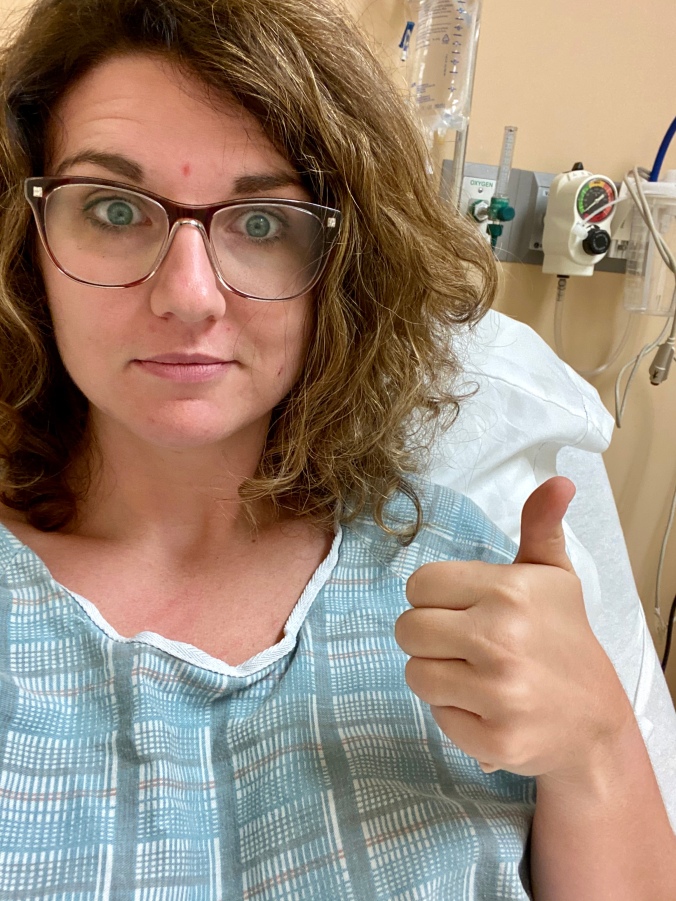