The calendar says it’s June 6, 2016, which is a full year since your birth. I must be mistaken though, because I could have sworn you were born only yesterday; I can remember it so clearly, and your infancy has flashed so quickly before my eyes. But I suppose the stifling heat outside doesn’t lie — it is finally June, and you are a year old today. And the past year has been the most joyous (and most exhausting) year of my life to date.

DISCLAIMER: The curse of the second child means you will hear me compare you to your older brother Dax a lot. I wish I could analyze you and your life without that comparison, but the truth is that parenting Dax is all I knew until you came along, and so now I have to relearn how to do this thing properly. Hope you’ll forgive me for that.

The first couple days with you in the hospital were much different than the ones we had with your brother when he was born three years earlier. Your dad left me alone with you a lot so he could go home and take care of Dax, so you and I had a lot of time to bond and learn how to nurse. Like your brother, you took to nursing pretty much immediately. You were a champ out the gate. Unlike your brother, however, you would not be quelled with a pacifier. You still can’t be. (You never took bottles, either, which means that the first six months of your life — when you were exclusively breastfed — we spent a LOT of time together. We were practically inseparable. For better or worse.)

You lived up to your nickname (Rainbow Baby) pretty much from the minute you joined us. You barely cried when you were born (it was just a breathy squeak, really) and were just content to be snuggled. I remember your first smile actually happened while we were still in the hospital. It nearly knocked me over. Your brother didn’t smile until he was six weeks old, so getting that flash of sunshine SO EARLY was unexpected and oh so precious.

Adjusting to life at home with you was both easy and crazy difficult. It was easy because you drifted into our lives with such little fanfare; you were rarely awake, and when you were awake, you were hardly ever fussy (only when you were obviously hungry or wet). To compete with a rambunctious, potty-training toddler was almost impossible. I remember chasing after Dax for long stretches of time and stopping after several minutes to think to myself, Oh dear, where is Case????, and I would rush to find you exactly where I’d put you (in the pack n’ play, or in your bouncy chair) completely content and quiet. Just happy to be here with us in our chaos. You were so easy.

But life was also crazy difficult. Though you were always so happy, you were also very attached to me. Like I already said, you wouldn’t take a pacifier or bottle, so the first six months of your life I couldn’t leave the house for more than two hours at a time. I also didn’t sleep much, because you wouldn’t sleep unless I was holding you. You wanted me and only me. Dada wouldn’t cut it, and forget a babysitter or other family member. You were a Mama’s boy through and through, which wore me a bit thin. 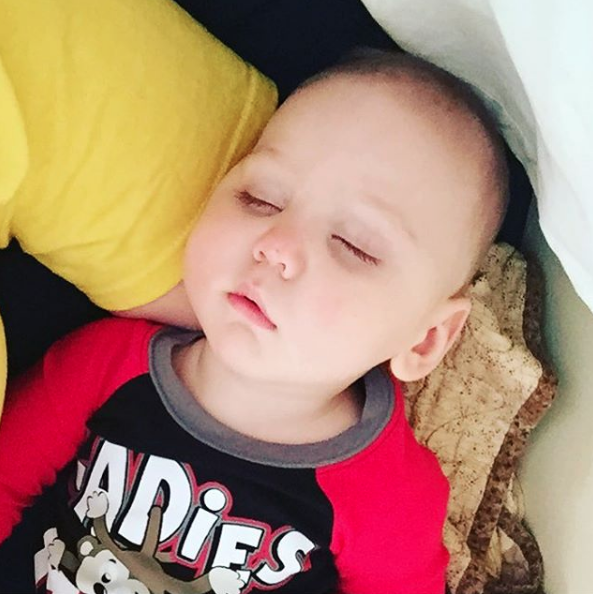 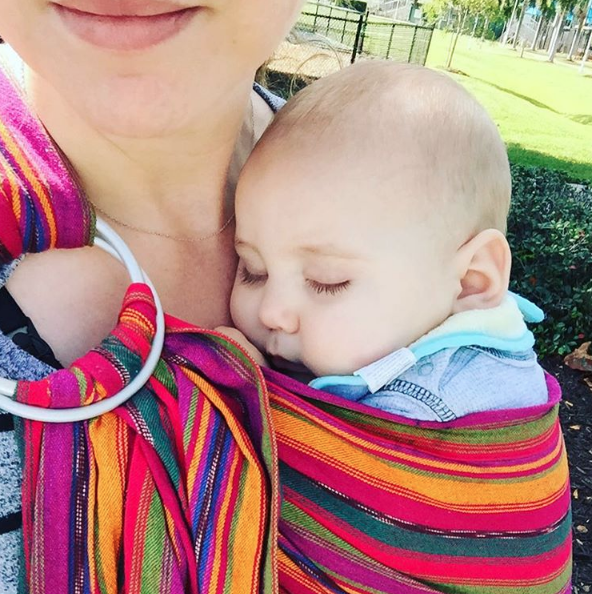 Now that you’re a year old, and I get at least a solid 4 hours of sleep each night, I can say that I loved being so needed by you. I love that I’m your favorite person, your nighttime lovey, your everything. But I remember being in the thick of it, trying to work/parent/survive on just an hour of sleep every day, and it was bizarre and terrifying. I learned to heavily rely on coffee, and I still have to pound a mug or two of it before 9am in order to function. (You’re so worth it, though. I promise. I wouldn’t have it any other way.)

I’m so grateful I was able to give you so much rest because in your waking hours you had enough energy to crush all of your milestones. You rolled over at only two months old, pulled up to standing at 6 months, and were eating solid (not pureed) food by just 7 months, despite having NO TEETH. (You finally popped your first and only tooth to date just a few months ago, though tooth #2 is starting to sprout.) You also eat pretty much anything that isn’t nailed down, but your current favorite foods (besides Mama Milk) are tomatoes (YEAAAAH!), peas, black beans, and… seriously anything else I throw at you. 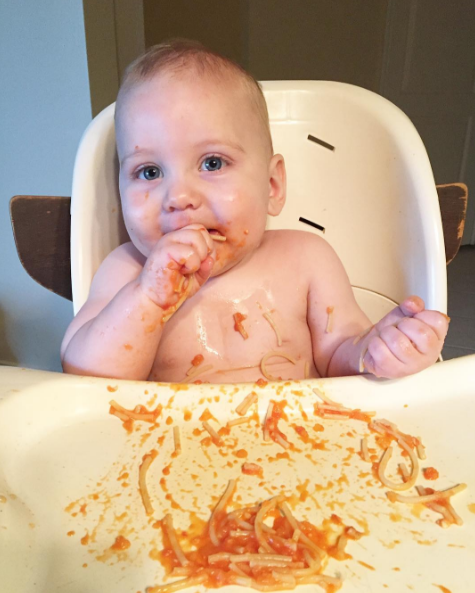 Around 7 months you started to talk back to us. Your first word was “Baba,” which has turned into “Bubba” (which is what we call Dax). This doesn’t shock me at all; you are HANDS DOWN Dax’s favorite person on this planet, and so his name being your first word is completely appropriate. After that you said, “Mama” (yay!) and then you learned how to say MILK and MORE in sign language, and finally you spouted “Dada.” At the time of writing you also say, “Kitty,” “Nana,” “GG,” “Uh oh,” and “hi!” You’re working on saying, PLEASE in sign language, but that one is proving to be a bit tricky. Instead of rubbing your own chest, you want to rub the chest of whoever is closest to you at the time. (You’ll get it, bug! I promise!)

At the moment your favorite activities are playing with your brother, getting tickled by your Dada and me, and putting things inside other things. If we need you to be occupied for a while, we will give you a handful of random objects and a bowl or bucket. You’ll be set for a long while. It is not strange for me to go to lace up my running shoes and find tiny toy trains deep inside them, or head to the bathroom for a shower and discover your brother’s clothes floating in the toilet.

You just love to put things inside of other things. And as frustrating as it can be sometimes, I love to find evidence of your exploration all over our apartment.

My dear Case, you’ve heard me call you our Rainbow Baby. This is a term that is given to babies who are born after miscarriages. While you are too little to know what a miscarriage is, just know that my pregnancy with you as well as this first year of life with you has been more precious to me than I can probably ever articulate. Just the fact that you are here and I can squeeze you is a miracle — a rainbow after a storm. But as if that wasn’t enough, your personality is nothing short of a colorful sky. You are always joyous, bright-eyed, and delightfully lovey. You are quite literally a rainbow personified. You are God’s promise of hope and beauty in a world that can sometimes be dark and ugly (despite your blase attitude toward cupcakes). 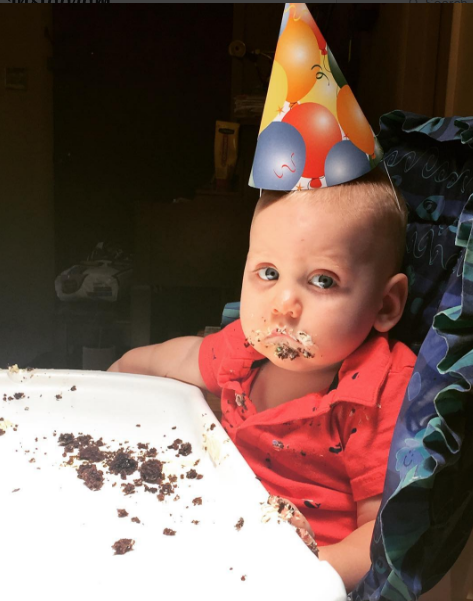 Case Daniel, before you were born I didn’t know how badly we needed you. Now that you’re here, I don’t know how we ever lived without you.

Happy birthday, my sweet Rainbow Baby. I love you so, SO much.

2 thoughts on “open letter to my second-born son on his first birthday.”