Hi there! I realize I haven’t blogged in approximately a hundred years, so let me apologize for that first.

I’m sorry for not blogging. Really I am.

This post is intended to be partly a way to explain the reason for my silence as well as a wrap-up to 2013.

I NEEDED SOME TIME TO PROCESS, OKAY? Sorry.

Today a friend/coworker of mine came over for a meeting about work/life/whatever, and while we were meeting, I drew a crude graph of what 2013 looked like for me in terms of how crappy it was. Observe: 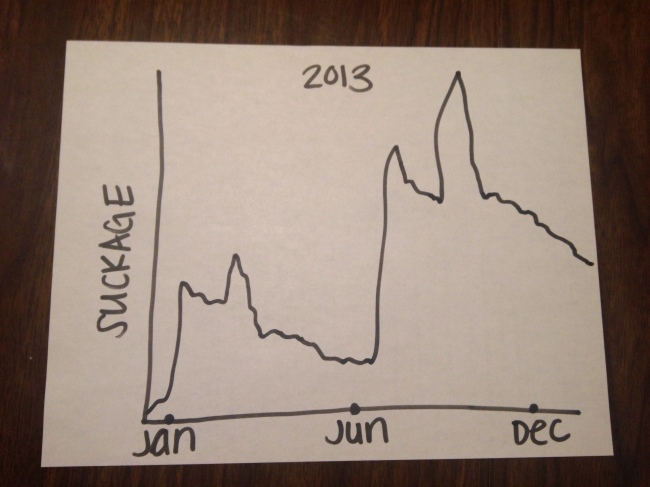 DISCLAIMER: I failed all of the math classes.

The beginning of the year started out okay, but then we found out that we were going to have to quit our jobs and move with no foreseeable solution. And, as you can see from my oh-so-accurate graph, having a tiny mouth to feed with no real idea of how to afford that caused a spike on our suckage axis.

But in the spring, we got offered jobs in a fancy town called Naples, Florida, which brought our suckage down a considerable amount. Granted, I was still very sad to leave the support network we’d spent the better part of a decade building but I was hopeful for what was to come. So while there was still some suckage caused by the realities of packing up and moving away, it wasn’t terrible.

The summer happened and, while I didn’t have any real close friends in Naples yet and I was really shy and scared and Dan was always out of town working and it was roughly eight billion degrees outside everyday, it was still relatively good. Even the loneliest person (who I kind of was this past summer) can’t complain when you’ve got Naples sunsets on the Gulf to gawk at every evening.

The summer also included the worst Tuesday which was absolutely a frighteningly high suckage point but I didn’t include it in my graph because it was thankfully just one day (I believe in math they call that an “outlier”) and I didn’t want to throw the summer baby out with the febrile seizure bathwater. Plus, some people came to visit us in the hospital, proving to me that we did actually have friends already and that we weren’t as alone as I may have thought. It was also a good learning experience for us; now we know that even if Dax is running a low-grade fever we have got to be diligent about treating it. But seriously, it was literally the scariest thing I’ve ever gone through and I would rather yank my fingernails out one by one than ever go through that again.

But then…. the fall happened. And Dan got caught in some majorly sucky work-related junk that left us seriously questioning our decision to move to Naples. I won’t (and definitely should not) go into it here, but just know that the months of August, September, and October, and November left us feeling pretty hopeless and sad.

But we got pregnant in September! Which gave us lots of hope!

And then we miscarried in October. And all of the hope that was blossoming in my heart was stomped out by dirty, messy heartbreak and I became so very angry. I harbored the kind of anger you can taste in the back of your throat; a bitter emotion that, rather than dissipating, festers with every minute that passes by and spreads through your whole being in an infectious rage, eating away at every blood cell and oxygen molecule in your body until you feel like you have literally rotted from the inside out.

And it is for this reason that I’ve avoided blogging. The internet, quite frankly, is chock full of negativity and sadness. I didn’t want to contribute to that. I wanted to give myself some space to get into a better place so that I could use my blog to speak some life into this world rather than to suck the life out of it. I think we can all agree that there are already enough things in this world that do that.

*pushes up glasses* So. In light of that… this is the life I’d like to speak to you today.

As you can see from the graph above, the suckage points do start to fall steadily after the terrible autumn. Things at work started stabilizing a bit, and after the miscarriage I was overwhelmed by love and support from so many people — people I’d met, people I hadn’t met, people who I knew but never knew had gone through a miscarriage themselves…

Based on all the bad things that happened in 2013, I could have easily shoved 2013 out the door with a scowl on my face. But to do that would discount all the great things that happened last year; all the friends we have made, all the debt we have paid off despite our barrage of medical crises, all the dates we’ve gone on, all the new words Dax has learned, etc…

The best way I can put it is that 2013 tore my heart wide open with gaping wounds of pain, however these holes made room for real love to be planted within me. And now, I’ve just got to spend 2014 nurturing those love seeds and investing in the relationships we’ve formed and watch them grow.

So, all that said, as we look forward to 2014, take a look at my graph and see that for every sucky peak, there is an impending valley of peace.

Listen, Reader: nothing is forever. As long as you’re still this side of the soil, no suckage peak will ever plateau. What goes up must go down. (That’s science. Which I also failed.)

So don’t give up. Don’t let what is currently sucky consume your whole life. Rather, let the hope of the future’s peace comfort you.