Happy holidays, y’all! I had quite the lovely vacation, though most of it was spent sick in bed. All I can say is that I’m so grateful that our little boy didn’t get what we had. It was a doozy of a cold. (Not the flu, thankfully, but a cold that definitely tried its damnedest to mimic the flu.)

After the Christmas Eve gatherings at church, the three of us piled into two cars and took the four-hour drive to my hometown to celebrate Dax’s first Christmas with my family. As was expected, Dax stole the show — my mom decorated her Christmas tree with only one “real” ornament (“grandbaby’s first Christmas”, of course) along with a sleighful (see what I did there?) of makeshift ornaments of teethers, rattles, and other such toys for him. There was also a truckload of toys under the tree for him, naturally. He was spoiled rotten on his first Christmas and I wouldn’t have it any other way. (Though Mom has, unfortunately, set a pretty lofty precedent for future grandchildren.) 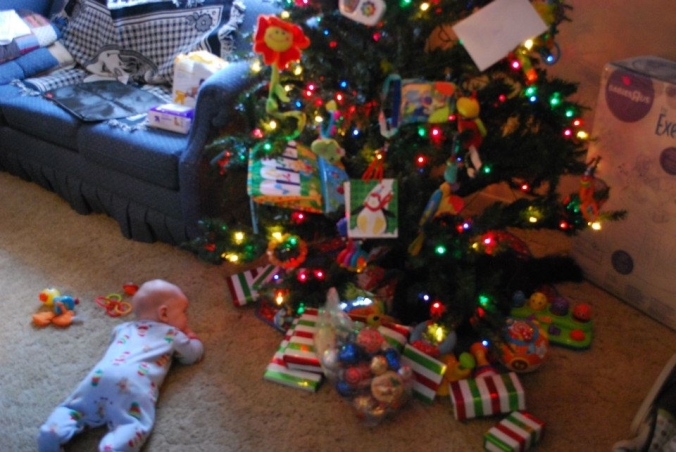 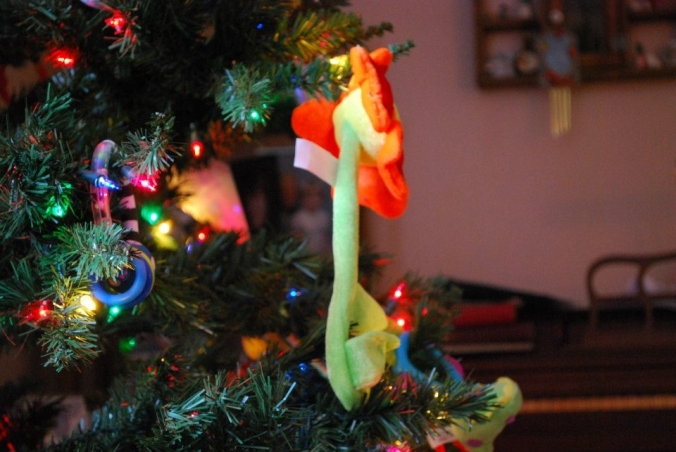 The day after Christmas, Dan drove back to Tallahassee for work, leaving Dax and me to navigate a few days of single parenthood in the familiar, yet unsettling arena that is my hometown.

Because I was sick, I didn’t do much venturing out in DeLand. But even when I did, I found myself rolling my eyes — as I tend to do — at the lack of culture, life, and overall substance of this town. As I always do, I lamented to myself over the ways DeLand will never change, as well as the ways it continues to evolve.

I am a brat, you see. Nothing pleases me in this place.

It’s not like DeLand is a bad city. It really isn’t. It’s a pretty decent place to raise a family, it’s extremely close to everything good the Sunshine State has to offer — beaches and theme parks, really — and it boasts a pretty adorable and historic downtown area. But I’ve never been able shake the reality that walking those streets gives me the heebie jeebies.

When it came time to apply for colleges, I had only one rule: anywhere but here. DeLand, for those of you who aren’t aware, is actually home to the very prestigious Stetson University. It’s also a hop, skip, and a jump from the University of Central Florida in Orlando. When I got my acceptance letter to UCF, I reluctantly resolved to allow myself to attend in the off chance I didn’t get accepted anywhere else.

When my acceptance letter from Florida State University, a campus happily nestled in the northern-most part of the state, came in the mail, that was it. My ticket outta there. After high school graduation, it was all I could do to wait until move in day at FSU to pack my 1993 Toyota Corolla with the essentials and spin out of DeLand like a bat out of hell.

Whenever I come back to Tallahassee after being in DeLand, my spirit settles back down. It’s as if I am returning “home” after being in exile. But that doesn’t make sense. I shouldn’t feel like I’m in a foreign land when I’m sleeping in the same house I grew up in. But I do.

The reasoning was unclear to me until I read this blog post by my friend Beth. At the end of it, I found myself slack-jawed. Did I write this post in my sleep? The way Beth feels about Ohio is how I feel about Tallahassee. But why? Tallahassee isn’t my “real” home. DeLand is.

The real reason I left DeLand in a cloud of dust isn’t because the city itself is bad. It’s because of what I experienced when I lived there and things about myself that seemed to only be avoided if I would just run away from them. Literally, in this case.

I experienced so many of these things — from an abusive boyfriend to an absentee father — in this otherwise quaint little town. And, at the naive age of 18, I thought that all of those things would be buried beneath the sands of time as long as I could just GTFO of there as quickly as possible. (Sorry, Mom, for the gratuitously profane acronym.)

But every time I go back, I realize those hurts are still very real. And, evidently, not completely scabbed over. And it is only by immersing myself within these familiar city limits that I can remember how badly I wanted to run away from it all. From myself.

If only it were that easy.

Tallahassee has become home to me, not because it’s more “cultured” (hold back your LOLs, Eric) or has more “life” in it. Truth be told, Tallahassee isn’t all that great. Sure, it has hills and canopy roads but it also has terrible traffic and sometimes it smells like farts.

Rather, Tallahassee has become home because it was here — in this modest state capital — where I learned that I have no reason to run anymore. I have nothing to hide anymore. I am broken, yes, and I am bruised. But those closest to me — the family I have gained here — know it. They know it all. Regardless, they also remind me on a daily basis that I am not the garbage I — and those who I surrounded myself with at the time — thought I was when I lived in DeLand.

As my ten year high school reunion swiftly approaches, I can only hope that I can confidently return with the realization that there is nothing to run from anymore. But until that day comes, I will wrestle with this idea of home and safety and hopefully learn a valuable lesson:

The faster and harder you run from yourself doesn’t get you any farther away. It only makes you that much more tired.

5 thoughts on “running is tiring. running from yourself is exhausting.”