Gonna keep this short and sweet.

My husband and I are on opposite sides of the aisle. One red, one blue. Last night, we shared a cheap American beer and pored over the sample ballots we got in the mail a couple weeks ago, discussing the nominees for each race, as well as the proposed state constitutional amendments. We had polite, political discourse about who/what we’d each vote for today, thankful to live in a country where we can not only have opposing views but be open and honest about them.

Then, we went to bed. Yes, the same bed. We even kissed each other goodnight.

This morning, I woke up and headed to the polls, feeling both confident about my choices and thankful to have a mate who, while he might not always agree with me, fully supports me and my views and always encourages me to think freely.

Damnit, you guys. Why all the hate?

My husband and I are a prime example of how you can have differing political views and still treat each other with respect. I’m not asking all of you to make out with me or anything but GOOD LORD can we keep the hate to a minimum?

Just because someone is a Democrat doesn’t mean he or she is a mooch without a job.

Just because someone is a Republican doesn’t mean he or she hates gay people.

Just because someone is non-partisan doesn’t mean he or she is a terrorist.

The meaner you are, the more fervently you bully people, doesn’t make you smarter than anyone. It makes you a douchebag. Plain and simple. As a parent, the hatred and disrespect I’ve seen on social media surrounding this election in particular is dumbfounding to me; can you imagine what it might look like in eighteen years when my baby boy is old enough to vote? To cast a ballot containing his views and beliefs? I hope and pray that, despite what hateful and ignorant things people might say to him, he grows up knowing that his opinions are not only permissible but are to be celebrated. THEY ARE IMPORTANT.

Even though we think differently, we’re all Americans. We’re all on the same team — a team that was founded on the right to to be yourself, no matter who you are or who you vote for.

If you are able to, please vote today. Your opinion matters. You matter. To this country and to the world. 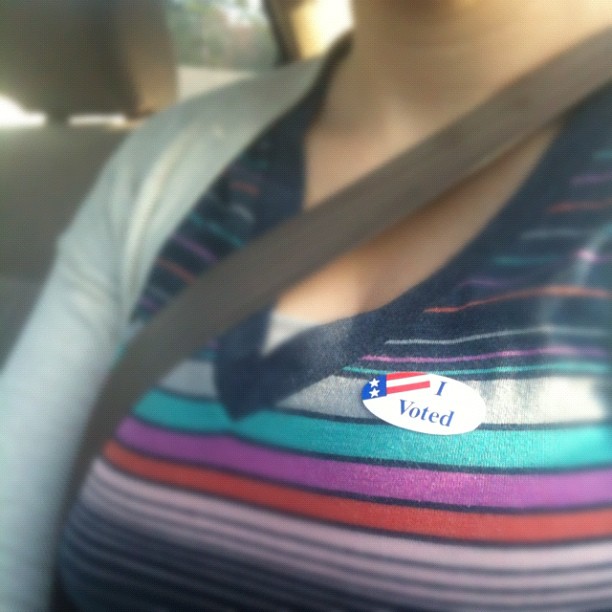