The other day I was putting on make up in front of my husband. Usually I don’t do that because Dan hates when I wear makeup, so I like to keep up the guise that I don’t actually wear it by waiting until I’m alone to put on just a tad of concealer to cover my blemishes. But this time, we were both getting ready for an event we were going to together, so I had to lift the veil.

As I was taking the eyelash curler to my lids, I had some interesting thoughts to myself:

This kind of looks like a torture device. I wonder if Dan, or any other male who is unfamiliar with such an apparatus, thinks I’m torturing myself?

Wait. As a matter of fact, curling my eyelashes IS pretty bizarre, whether it looks so or not. These little hairs aren’t even an inch long. Does anyone notice whether I use the curler or not? Come to think of it, if I catch my eyelid at just the WRONG angle, it absolutely IS torture! I’m torturing myself! Ah!

Why do we do such strange things to ourselves in the name of beauty?

Today I stumbled across something on the Internet that takes the torture-for-beauty cake (and doesn’t eat it, apparently): 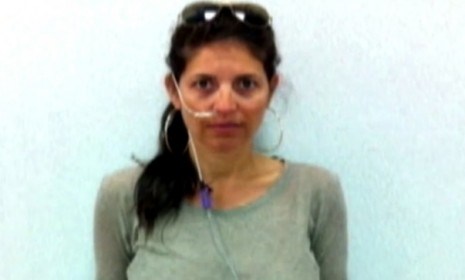 Image via The Daily What

(From TDW) Disturbing Trend of the Day: In a last-gasp attempt to fit into the THE DRESS, desperate brides-to-be in the U.S. (like Jessica Schnaider, pictured) can now have a feeding tube inserted into their nose that provides a drip of liquid protein and fat (with no carbohydrates) through the esophagus into the stomach. The $1,500, 10-day treatment is effective: The tube delivers just 800 calories a day, and generally results in the loss of at least 10 percent of body weight — and perfect wedding pictures. But… ew?

This makes me so sad. And hurt. And angry. Mostly, though, it makes me want to put my two weeks’ notice in on life on this earth.

I never watch the show Mike & Molly, but last night it was on while Dan and I were doing chores. The subject matter of last night’s episode was Molly being on an unhealthy juice fast in order to drop several pounds in three weeks to fit into her wedding dress. Sigh. Granted, the moral of the episode was that what Molly was doing was turning her into a crazy person, not at all the person that Mike wanted to marry, but still — the mere fact that this was portrayed on television at all puts the idea into girls’ heads that you can’t possibly wear a wedding dress without obsessing over your weight first. And oh, ha ha ha, it’s a comedy, so let’s all laugh at how silly it is instead of talking about how serious and disturbing it is. Oh ha ha ha, CBS, you’re hilarious.

So how did we get here? How did we get from ha ha ha, silly sit coms about overweight people, to bloody feeding tubes?! Are you kidding me? When will the insanity stop?

Why, oh why, are we perpetuating this? Why are we continually sending out messages that this type of behavior is acceptable and normal? WAKE UP, WORLD. THIS ISN’T OKAY.

I have no more words to offer. Instead, here’s Internet phenom Jenna Marbles on diets, F words and all. Enjoy.

2 thoughts on “beauty and torture.”