Do you know what I’ll be doing this time tomorrow? I will be counting down the hours until I’m seated at the movie theater watching The Hunger Games at midnight.

Now, I know I’m only the four billionth person to say this on the Internet, but this book series by Suzanne Collins is seriously incredible. It’s everything I wish I could write and more. It’s my favorite series right after Harry Potter and, if you know me at all, you know that’s a huge deal. (Gotta give mad props to Emily for convincing me to read it. Shout out.)

This blog post is not about why you should read the books. I really don’t have time to get into it. (But seriously though, you should. Trust me.) This post is to celebrate a book series whose main protagonist is a strong, fierce, and, dare I say, kick-ass female. In today’s society, we really needed someone like Katniss Everdeen to which our young girls (like Emily, for instance) could look up. Katniss doesn’t need a man to take care of her. She knows what’s important in life. She has a feminine side but that, by all means, does not define her. 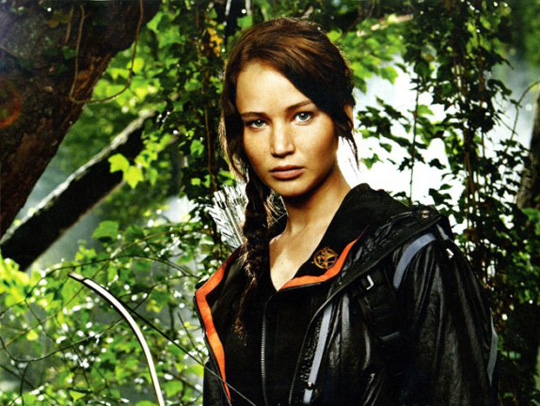 The other day, Dan and I were in Wal-Mart (for those of you paying close attention, yes, this was the same Wal-Mart trip that was the catalyst to me breaking down in a bathtub later, but whatevs) and while he was evidently poring over the purchases of the lady in front of us, I was furiously flipping through each magazine on the rack with Jennifer Lawrence (the actress portraying Katniss) on the cover and trying to consume as much information on the film I could.

I found that each article had one thing in common: they all compared Katniss to Bella Swan from Twilight.

And I about threw up.

If there is any fictional character that Katniss is like, it is not Bella Swan. If you ask me, Bella Swan is the worst heroine to show up in fiction since, well, ever. I would never want someone like Emily to look to Bella as an example of what it means to be female. Bella is weak, codependent, seemingly in love with the idea of being abused, depressed, and crazy. Katniss is strong, sacrificial, logical, level-headed, and, by all accounts, a B.A.M.F.

At any rate, I’m not writing this to bash Twilight. I have a lot of friends whom I greatly respect that read these books for entertainment purposes. But I bet they’d all agree with me on the fact that Katniss and Bella have about as much in common as I have with a dolphin.

So, rather than compare Katniss to Bella (because seriously, apples and oranges doesn’t even begin to cover it) I’d like to highlight all the reasons that Katniss rules. Period. Not in comparison to anyone else.

1. she supports her family.

Katniss’s father died in a mine explosion when she was only twelve, leaving her mother so distraught and emotionally detached from the family that she could barely even get out of bed. This caused Katniss to step up and provide for her and her little sister. Rather than crying about it and watching her mother let her family starve to death, she took it upon herself to learn how to hunt, gather, and trade so that her family would survive.

2. she volunteers for her sister as tribute in the hunger games.

She literally puts her life on the line in order to save her sister.

She could kill anyone by just the snap of a bow and arrow. I mean. Dang.

4. she stands up for what’s right.

Katniss knows that what the Capitol is doing to Panem is injustice at best, inhumane at worst, and refuses to stand for it. At only sixteen, she stands up to something way bigger than herself.

5. she doesn’t let romance get in the way of what’s important.

Yes, in the books, there are two guys vying for Katniss’s affection. While she does consider this, it doesn’t govern her every move. What’s important to her is survival and protecting her family. Romance is an after thought. (Which is impressive because, hello, Peeta and Gale are both dream boats, am I right?)

All that to say, I raise my glass to you, Suzanne Collins, for writing a character that I believe girls everywhere should look up to. As someone who is tired of women being portrayed as meek, inferior sex objects, it’s refreshing to see someone like Katniss come in and shake things up a bit.

May the odds be ever in your favor!

2 thoughts on “an ode to katniss everdeen.”