Remember how Dan and I went to Chicago last month? While it was definitely an amazing week, getting to Chicago proved to be quite, um, trying. Because it costs roughly $23,497,324,234,876,234 (give or take) to fly out of Tallahassee, we had to fly out of Jacksonville. And, naturally, the cheapest flight was also the earliest (8AM) so we had to be at JAX around 6AM. Our options were: stay the previous night in Jacksonville or hop in our car at 4AM and drive two and a half hours to Jacksonville.

We chose the latter because we are super duper broke. And Dan was so excited to go back home (he’s from there — have I told you this already? I married a Chicagoan, which I think is impossibly cool…) that he woke up at 2AM. Of course, this means that I also woke up at 2AM. (The never ending curse of a light sleeper.) We danced around our house until our alarms sounded at 3:30, then packed up our Camry, and headed east.

And we traveled. A lot. After all was said and done, we finally landed in Chicago around 12:30PM local time, 1:30PM “our” time.

All that to say, the goings-on of our first day are rather fuzzy, I’m afraid. But. When I went to the bathroom at the Jacksonville airport (at around 6AM after already being “up” for four hours) I had to take a picture of it. Not because I was deliriously tired (though I most certainly was) but because of how the entrance was decorated: 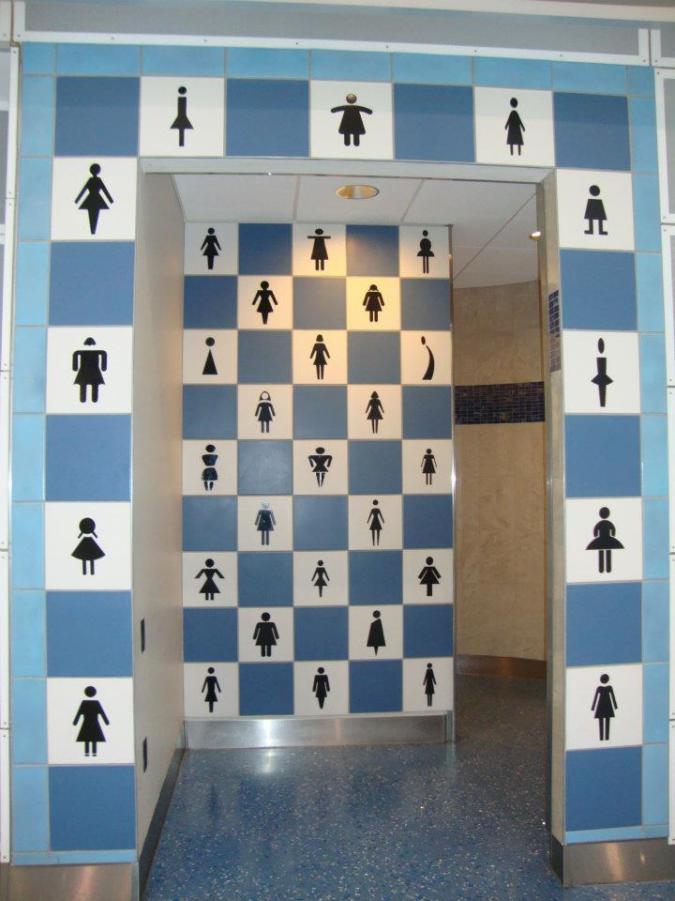 Isn’t that incredible? It’s all different kinds of women, all shapes and all sizes! Though some are a bit ridiculous (is that a banana-shaped woman I see?) I love the message! That we’re all different, but we’re still women, no matter what we look like.

And just so you know, the men’s bathroom was done the same way. But I already looked really stupid taking a picture of the outside of ONE bathroom let alone TWO. So. There you go.