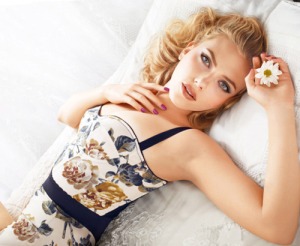 On weeks where I don’t particularly love my appearance it’s most likely because I’m comparing it to that of Scarlett Johansson. (Why Scarlett, you ask? Well, partly because my husband has mentioned how hot she is and partly because I feel like in the normal world, we’re in the same beauty pigeon-hole. That is, we’re both blonde-haired and blue-eyed with big boobs. She just somehow manages to do it way better than I do.)

BUT! We must remember that underneath stage makeup/Photoshop/personal stylists, celebrities are actually people. Take Scarlett Johansson, for instance. While I spend hours staring longingly Scarlett, wishing on every star that twinkles that one day I could wake up and look like her, she is a regular woman. Just like me. We’re on the same team. We probably both stress about random zits and menstrual cramps and unruly eyebrows and uncomfortable bras.

In fact, this golden-haired goddess probably has it a lot worse off than I do.

Some people (myself included) have been known to trash celebrities as if we went to high school with them and found them on Facebook and, after mindless stalking, concluded that they’ve “let themselves go” or “went off the deep end” and deserve to have people talk mad crap about them.

“Kim Kardashian? Ugh! Whatever! Why is she even famous? She’s fat and ugly and doesn’t have any talent!”
“Paris Hilton looks like a twiggy alien and she reeks of STDs and shame.”
“I’m so appalled and Disney should be, too! Lindsay Lohan TOTALLY got breast implants. I mean look at her! There is no way those are real!”

Some could argue that celebrities choose to put themselves in the line of scrutiny, but I beg to differ. Just because someone chooses a certain career or lifestyle doesn’t make them any less of a person with any less feelings or emotions or personal struggles. While I’ve most definitely been bullied about my appearance, my abuse has only come from people I meet on a daily basis, usually in face-to-face encounters. Sure, comments like that sting like hell. I’m not trying to downplay it at all. But, unlike Scarlett Johansson and any other celebrity that ever was famous for even a second, when I Google myself, I don’t come across endless articles/pictures/blog posts/tweets/whateverthehellelseyoucanthinkof picking me apart.

I used to want to be famous when I was little. I dreamt of walking down the red carpet to the Oscars, a shoe-in for Best Actress for That Movie I Was In That One Time, wearing the prettiest (and most expensive) dress MostFamousDesignerName would offer up to only the prettiest (and skinniest!) actress out there (moi, of course.)

But as I got older and the gap between celebrity life and ordinary life began to be filled in due to tabloids, entertainment gossip websites, and social media I noticed some celebrities start to crack under the incessant scrutiny and I knew that there was no way in hell my skin was thick enough to make it out of that life unscathed.

My goodness. If cameras were forever in my face (like right when I left the gym or when I was shoving a big spoonful of Olive Garden into my face) and people were constantly publicly defaming me over my weight/lifestyle/face/personal choices/you name it, I’d probably shave my head as a metaphorical middle finger, too. (Team Brit Brit!)

Demi Lovato, a teenage product of Disney, recently went into rehab for “personal and physical issues.” When she ended her rehabilitation program, she opened up about her struggle with an eating disorder and the pressure on girls to be perfect. She fell victim to the scrutiny, but thankfully, she went into rehab to get better. Now, she’s spreading the word about her pain, hopefully opening up the dialogue with younger girls and letting them know that they aren’t alone and that perfection does not make them worthy of love.

Click here to check out Demi’s “Love is Louder” campaign.

I’m pleased to say that other celebrities have started using their popularity to spread a message of self-love and the bassackwards view society has about body image and self esteem.

Selena Gomez, another Disney diva, has released a self-love anthem for tweenagers. As sugary sweet and nauseating as the music is, I can’t think of any better words to hear young girls sing than, “Who says you’re not perfect? Who says you’re not worth it?”

Edgy pop singer P!nk’s latest single, “Perfect,” is about a young girl’s journey out of the darkness that is self-hatred. As played out as this song has become, I can’t think of a single woman in my close circle of friends who can’t relate to this even a little bit.

Even Stephen Colbert has recently attacked the ridiculous standards of society and the shameless tricks the beauty industry plays on women.

A model, Tyra Banks has been under the beauty microscope since she was a child. Some hateful tabloid comments of her in a swimsuit were the catalyst to her telling the world to “kiss [her] fat ass!” (This clip is freaking brilliant.)

Over the past few days I’ve been engrossed in Tina Fey’s new memoir, Bossypants. (That woman is my hero. Seriously. As a writer. As a wife. As a TV producer. Sigh. She is everything I want to be and more. Sorry. Getting sidetracked.) In it, Fey humorously documents her own personal account on the beauty standards for her as a celebrity and as a woman. She lists her top beauty tips for her readers. I would list them all here, but I want you to go out and buy her book. You’re in luck, though, because I will definitely post her number one beauty tip of all time. Fey writes:

If you retain nothing else always remember the most important rule of beauty, which is, who cares?!

4 thoughts on “in defense of celebrities.”