Okay okay okay. I know you’ve all been dying to know why my blog has been so quiet. (Or, at least, this girl has.) I’ve been MIA for a number of weeks for one (pretty demanding) reason: 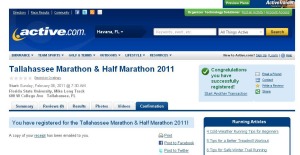 Surprise! Now all you crazy stalkers know where I live!

I’ve been training to run my first half marathon on February 6th. WHAT? Yes. Half mothertruckin marathon. That’s 13.1 miles in case you weren’t aware. (Before you stand up and start hooting and hollering for me, chill. I haven’t done it yet. The farthest I’ve run in one session is seven miles.)

It’s so crazy to think back to nine months ago when I ran my first 5k race. I was so proud of myself! Now, a 5k is merely a warm up for me.

Now, my training hasn’t gotten in the way of my writing in the way that you’d think. I’m sure you’re all assuming that I just haven’t had the time. While you’re right in thinking that I’ve been understandably pressed for time, that’s not my problem. I can usually find time to write no matter how swamped I am. (It’s a necessity, people. Writing is therapy for the poor.)

I just have too much to write about that it’s overwhelming.

No matter how compelling my iPod playlist is (or how deafening the volume is) running doesn’t clear my mind. Rather, it does the opposite. For some unknown reason, running ignites my idea gland (?!) and my brain is flooded with deep thoughts and delicious words and poignant observations that I need to write down. But I can’t. Because I have to run a certain number of miles a day to keep training for this dang race. So I stomp the pavement faster, all the while internally repeating sentences and paragraphs and lists and maps in my brain in an attempt to remember everything I need to write down in five, four, three, two, ONE! miles. (Recently I cut a run short because I came up with a chapter for a book I’m writing. A chapter! Of a BOOK!)

But if I don’t stop my run to write down my thoughts, I am a lost cause. When I get home to my journal and laptop, it’s all gone. I have nothing. I try so hard to hold on to it for the duration of each run and I always lose it on the pavement somewhere between my work and my house.

And all I’m left with is a soggy shirt and messy hair.

This blog turns one on January 9th. Wow. I can’t believe it’s been a whole year already! It’s as if it was just yesterday I was waking up in the middle of the night to tend to my blog. Now, it sleeps at least eight hours each night and I’ve just started feeding it solid foods like Cheerios (it still prefers to be breastfed, though.) Before I know it, my blog’s going to be walking soon and won’t need me anymore. 😦

Here’s what WordPress has to say about fueled by diet coke:

The busiest day of the year was May 12th with 122 views. The most popular post that day was the perfect wife?.

Where did they come from?

The top referring sites in 2010 were facebook.com, twitter.com, WordPress Dashboard, helenlindsay.tumblr.com, and aindreas321.blogspot.com.

These are the posts and pages that got the most views in 2010.

if it jiggles, you can lose it. September 2010
4 comments

That’s all because of you. Thank you SO MUCH. Here’s hoping 2011 is just as good, if not better!